I’m not much of a city person but New York is a must see for everyone! It’s always been a place I’ve wanted to visit but at the same time I felt as though I wouldn’t be arsed if I never got around to going. Back in 2017 my mum and I went as joint belated birthday presents. She was absolutely buzzing for the holiday, I was just looking forward to getting away from work and the UK for a bit. At the time I had just started my anti-depressants and was waiting to start my online counselling. I wasn’t mentally all there so the holiday was booked at an ideal time really. A chance for me to somewhat sort my head out.

When we landed in New York we were waiting to get out passports checked when we saw on the TV a guy had driven onto the pavement in Times Square and injured several people. It was upsetting and not the most welcoming way to start the holiday. We got in our mini bus to the hotel and the roads were chaotic. At first I kinda thought it was to do with what had just happened as the whole of Times Square was closed off but I soon realised that this was New York. It made more sense to walk to your destination then to get a taxi as the roads were constantly chocker blocked. Horns always beeping, drivers shouting at each, people jumping in and out of lanes it was crazy!

During our time there we visited several touristy spots.

Would recommend visiting here (especially if you love Madagascar). It makes you realise how constantly busy New York always is. There’s always people in here, minding their own business and rushing around. You can tell why it’s called Grand Central Station. As soon as you walk in you feel like you’re in a very prestigious building. It is very grand!

The park is fucking huge. We probably only managed to see a quarter of it (if that). When you walk in the park though it’s hard to believe you are still in one of the busiest cities in the world. Central park is so peaceful. It’s a beautiful addition to New York city that you just have to take a stroll through.

It’s very, very windy at the top but it’s still an absolute must do! When you get to the top you can truly see how big New York is and how minuscule the traffic and thousands of people are.

Make sure you see a Broadway production! When we went Aladdin was on and we managed to get front row seats smack bang in the middle of the theatre. The production was amazing. The performers were extremely talented, the costumes were beautiful and the overall setting was just fantastic.

This is a full day out. We only arrived there in the afternoon so we didn’t get to see the whole museum as it is huge! Like bloody huge! We walked around in circles a few times because it’s like a maze in there but its so worth it. There is so much history in there covering many different subjects and time periods. To any crystal lovers out there I would highly recommend you visit this place. I have never seen a crystal/rock display like it before! I would also recommend visiting their dinosaur section too! It’s the perfect place for history lovers. 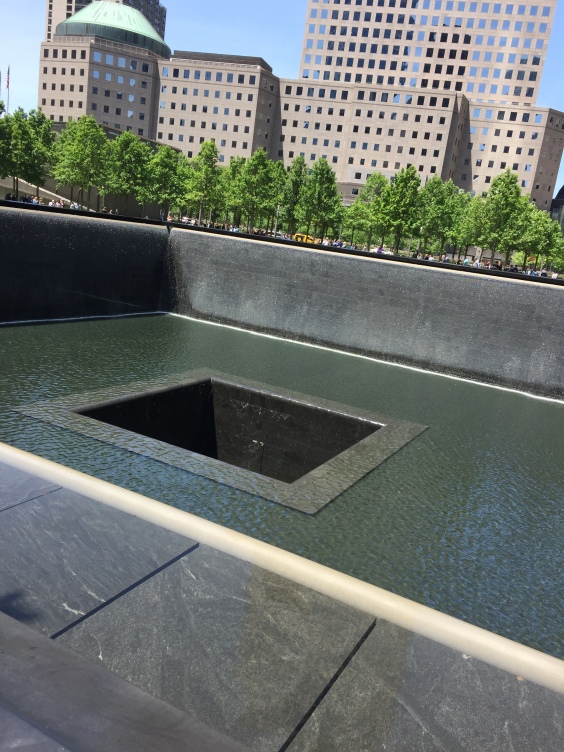 For a place that holds so much tragedy, the memorial site is breathtaking. So peaceful, beautiful and it really touches your heart. An absolute must see if you’re in New York. 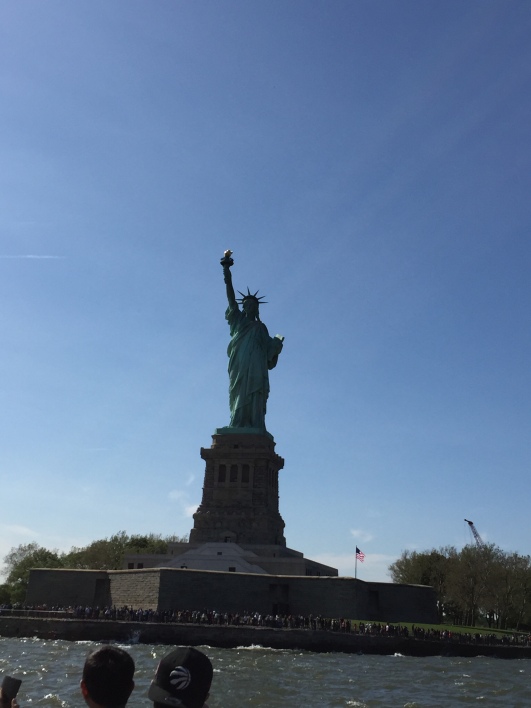 We went to the top of the Rockefeller at night and this was my favourite part of the holiday. I can’t even describe the feeling you get when you see New York down below you during the night. The lights and the city buzz are just amazing. If you’re going to New York I could not recommend a sight see more than this.

If you’re in need of some good luck then you need to head to Wall Street and stroke the bulls balls. You might be in a queue for a fair few minutes but it’s something that has to be done if you’re in New York! (Sadly don’t have any pictures of here!)

Before I went to New York I had heard a few mixed stories about the people that live/work there. Now don’t get me wrong, I did come across the odd wanker here and there but nowhere near as many as I was expecting. After our day at the museum, we walked back to our hotel (which turned out to be the longest walk we have ever done) via central park and then through Times Square. When we got to Times Square we were so tired and borderline exhausted from all the walking that we just wanted to get back to our hotel but whilst walking through Times Square and I could hear music and a commotion. So me being the music lover and curious cat that I am decided to see what was going on. Turns out there was a massive street party right in the middle of Times Square. A couple of hours had past and my mum and I had made several friends and danced the evening away in the street. It was a great day and night for us both. Safe to say when we got back to our hotel room we instantly just crashed in bed.

My mum and I went to New York for a long weekend but could easily have stayed for longer as there is so much to see and do. If you’re looking for a place to add to your bucket list, New York is that place! Whether you’re a city person or not, it is somewhere that you will always remember.

Till next time New York,

One thought on “The Big Apple”