I never wanted to go on antidepressants. When I was about 18 years old I had a few friends and family members suggest that I try them but I refused. I knew I was struggling but the thought of taking a tablet everyday just to try to make me happy didn’t sit right with me. I wanted to make my own happiness. I wanted to conquer depression on my own. I used to think that going on anti-depressants would affect my life majorly. I thought it would affect my working careers, my personality, my mind and how others see me. There wasn’t much understanding about depression then as there is now. Depression had a stigma around it especially in young people and I think that played a bigger part in my decision to stay away from the tablets then I realised. I didn’t want to been seen as crazy and I certainly didn’t want to be seen as depressed. I was scared in case future employers would check my records and see I that had been in counselling or on tablets and then they might think “Yeah she’s unstable. We won’t hire her”. When I was about 19 years old I was really struggling. I was putting on a brave front to everyone but inside I was in pain but I still refused to go to a doctor. The thing is, several months before this I had been to a doctor. A doctor that knew me and my family well. My mum told me how amazing and comforting she was when she went to see her about being depressed about my dads death. So I went into the room, sat down and instantly broke into tears. She sat there as I cried and I tried to explain what was going on with me and she didn’t really say much. She then asked me to answer all these questions. We added my score up and she told me I was in the severely depressed section. I cried even more. She booked me on for some counselling but she told me there was a 6-8 week wait for me and then it could be a few more weeks before I actually started my counselling sessions. I sat there puzzled. She had just told me I was severely depressed, yet I had to wait over a month for some counselling. I asked her “Well what do I do now?” and she simply replied “You will get a phone call in about 6-8 weeks to discuss counselling arrangements”. I stared at her, burst into tears and left. The reasons as to why I was depressed were difficult enough but for me to actually go to the doctors about it was beyond difficult and I felt let down. I couldn’t understand why she was so amazing when my mum went to see her about the same subject, yet she seemed so un-bothered when I went. I put it down to my age. Mental illness wasn’t taken as seriously as it should be for people in my age group. I went home feeling even shitter then I did before.

Eventually I got the phone call. I was living at a college in Cheshire at the time so I was there 5 days a week and sometimes weekends. On the phone they were telling me how all counselling sessions are during the week and the latest session they can do is at 5:30pm. I explained how it would be borderline impossible for me to attend sessions at that time as some of my lessons didn’t finish till 5 and I was not sitting on the M6 for several hours stuck in traffic. The guy on the phone told me I needed to come into their office for a meeting. That way they could get a few more details about why and what I need the counselling for. So we set up a meeting and off I went. I sat down with a different person this time and I thought she would be my counsellor but she wasn’t. She was asking me some personal questions that I just didn’t feel comfortable answering to someone who wouldn’t be my counsellor, so I kept my answers brief. She asked me the same questions as my doctor did and she told me I was severely depressed. I explained my living arrangements to her and how it wouldn’t be possible for me to attend weekday sessions. She informed me that they do weekend sessions but they are group sessions. She then went onto say with me being severely depressed I would be better with one to one sessions. Yes I know that, but you’re not giving me any other option?! It’s either a weekday session which I was 99% sure I wouldn’t be able to make it there on time or a group session which you have clearly stated wouldn’t be suitable for me. I felt like giving up. Part of me just wanted to say “Fuck this” and walk out. She said it would be 3-4 weeks before I started my counselling so that could give me some time to make arrangements. So I went along with it but my head wasn’t in it anymore. I went home feeling more let down and more hopeless. I felt like I wasn’t being taken seriously. Two professionals had told me I was severely depressed yet the bare minimum was done about it. After about 3 weeks I got my phone call to say they had gotten me a counsellor if I still wanted it. I asked them when the sessions would be and they told me it would be 5:30pm on Thursdays. I refused. I told them I didn’t want it anymore and that was the end of the phone call so I was back to square one.

Fast forward to my mental breakdown in May last year and my mum manages to convince me to go to the doctors. I reached a point where I physically couldn’t hide the pain I was in. It was blatantly obvious to everyone that I was on a path of self-destruct. After spending an evening sat on my bed crying, I finally tell my mum that I will go to the doctors but I refused to see the same doctor as last time. So my mum booked me in with my GP instead who has known me since I was born. I went in and broke down. I explained to him my past and all the things that were going on in my head. He listened. He sat there and listened to me. He asked me the same questions and told me I was severely depressed. He gave me a number to call that would take me directly to a counselling service. He then prescribed me with Sertraline. He told me because I was only 21 he didn’t want me to be on the antidepressants for too long. He prescribed me with 100mg tablets that I had to take once a day.

For the next few months I was doing an online counselling course called Silvercloud. I loved it. It was interesting, informative and it helped me understand myself more. I had to do 11 weeks of this and then I would start my one to one counselling sessions. I couldn’t always tell if the tablets were helping or not. At first they seemed to but then I thought it was more of a placebo effect. A few months later and I had started my one to one counselling sessions which were mostly focusing on my PTSD and anxiety. I’m not a consistent person. I severely lack consistency. I can’t even stick to a hair or skin regime for more than 4 days so when it came to taking a tablet every morning I did forget and I started to forget more and more to the point where I only took them on mornings when I woke up feeling low. In December last year I got signed off work (which you can read about here) by a doctor. This was a different doctor. He was fairly new but he was lovely. He signed me off work and up’d my dosage to 150mg and asked me to come back in a few weeks time. For the next few weeks I managed to take my tablets daily but then I started to forget again and by February I had taken myself off them completely. I couldn’t be arsed. I wasn’t 100% sure they were doing anything for me as I felt the exact same when I was on them and when I wasn’t on them. It’s hard to say whether I got withdrawal symptoms as I was on them for less than a year and I wasn’t taking them regularly for at least 3-4 months.

It’s hard to say whether the tablets helped me or not but I can 100% say my counselling helped me miraculously. At the start of each session I had to answer questions (the same questions my doctors asked me). The answers were score based. So for example one questions was “Do you feel down, depressed or hopeless” and I would choose an answer from
– Nearly Everyday (4 points)
– More Than Half The Days (3 points)
– Several Days (2 points)
– Not At All (1 point)

There would be 3 sections of questions for me to answer. 1 section was based on my depression, the other was anxiety and the other was PTSD. Below are my graph results from when I started my counselling, to when I finished it. 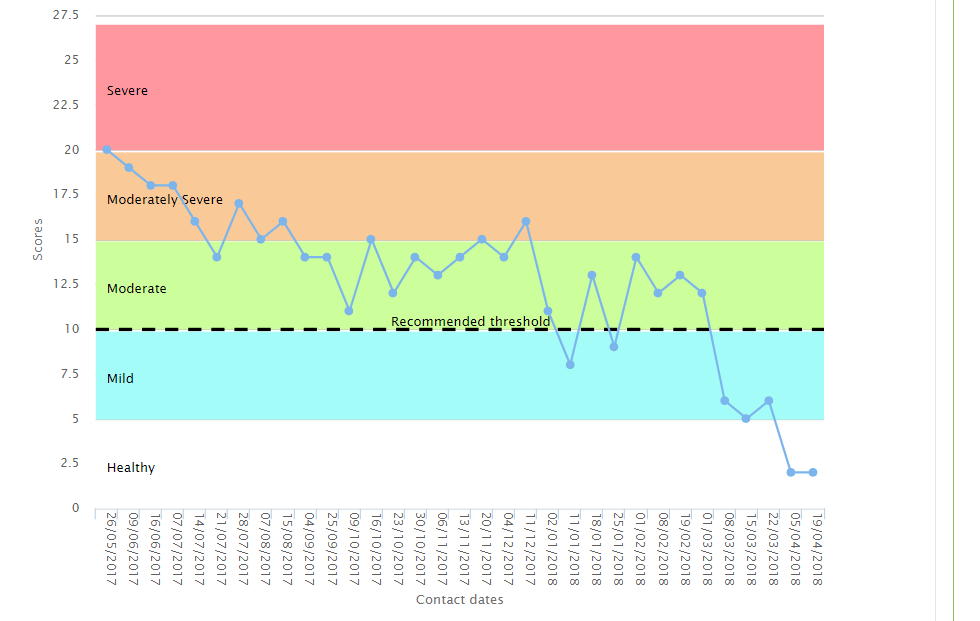 I can’t say much about the tablets but the counselling worked wonders. I’m glad I went and got professional help when I did. Looking back I wouldn’t have been able to fight the battle by myself, but I understand why people may feel the same way but it’s okay to admit defeat. It’s okay to admit that you need a bit of help. It’s your mental health at the end of the day. It’s something that should be taken seriously by a professional and YOU. Don’t let your ego or other peoples opinions stop you from putting you first.

Please, it’s okay to say you need a bit of help and guidance.

Don’t ever be made to feel like you are on your own because you never are.

Sending my love to you all,